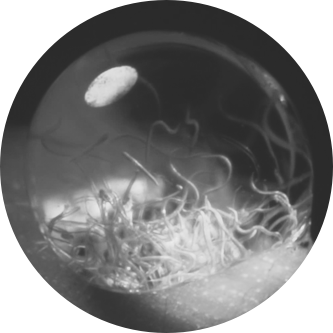 Lungworm (Dictyocaulus viviparus) is the cause of parasitic bronchitis (hoose or husk) in cattle. The disease is most prevalent following high rainfall and mild climatic conditions but its occurrence is extremely unpredictable. Characterised by the symptoms of respiratory compromise of varying severity, the disease typically, although not exclusively, affects first season grazing animals on permanent or semi-permanent pastures between the months of July and September.

Severely affected animals breathe very heavily, taking far more breaths per minute than normal and having to make real efforts to suck in air. They will frequently adopt the classic ‘air-hunger’ position of mouth-breathing with the head and neck outstretched. Animals often have a deep harsh cough, salivate and are reluctant to eat or drink.

Reinfection syndrome can affect cattle that have developed immunity following exposure to the parasite whilst grazing. It occurs when cattle are exposed to a high pasture challenge that overwhelms their immunity to initial infection. Cattle suffering from reinfection syndrome show severe signs of respiratory disease which result from the intensity if the immune response that occurs as maturing lungworm larvae are recognised and killed as they reach the small airways. Faecal larval counts may remain negative since egg laying adult populations of the parasite are not typically established.

Parasitic bronchitis can be fatal, and even following successful treatment, the amount and severity of damage to the lung tissue can mean that recovery may be protracted and in some animals never fully complete. To minimise the impact of this disease, it is imperative to recognise the signs and treat as early as possible.

Losses in excess of £100 per head have been reported following outbreaks of lungworm in dairy cows. This resulted from a reduction in milk production and impaired fertility alongside diagnostic and treatment costs.1 In another outbreak where 50% of the adult milking herd exhibited signs of respiratory disease, the average daily milk yield increased from 23 kg to 30kg per day following treatment with eprinomectin, highlighting the scale of potential production losses.2

First season grazing cattle are typically the most susceptible to disease not having had the chance to acquire any immunity prior to exposure. Adult cows may have built up some immunity to lungworm as youngstock, either naturally or via vaccination but first line immunity to infection only lasts between six to twelve months. For this immunity to be sustained year-to-year, the booster effect of repeated low level challenge from the pasture is necessary.

Outbreaks can occur in all classes of cattle when there is a mismatch between immunity and the scale of the lungworm challenge. 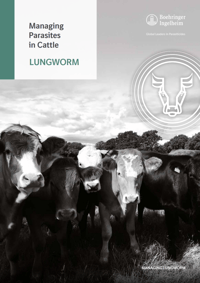 Lungworm is unique among the roundworms of cattle; it is L1 larvae rather than eggs that are shed in the faeces onto the pasture . The L1 larvae are pre-packed with food and use this as an energy source to moult to L2 and then L3 stages. The infective L3 larvae move out of the faecal pat and onto the grass either alone or with the aid of the fungus Pilobolus, which even in still air can spread larvae up to three metres.

Persistence of L3 larvae on the pasture is dependent on the weather. Survival time can be as short as two to three weeks in summer. The parasite is believed to persist from year to year as a low level infection in small numbers of carrier animals within a herd.

One study showed that when 200 L3 larvae were used to infect animals, 70 developed to adult worms, which in turn produced 2.5 million L1 larvae by just 30 days post-ingestion2, so it is easy to see how quickly disease can develop.

Lungworm is often diagnosed based on clinical signs and grazing history. Faecal samples can be examined using the Baermann test to detect the presence of larvae. Antibodies can be detected in blood and milk samples and indicate exposure to the parasite.

Lungworm may be controlled either through the use of preventative worming programmes, a vigilance-based approach with animals treated as soon as lungworm infection is confirmed, or using vaccination. Vaccine should be administered prior to turn out, and adequate time allowed for immunity to develop before cattle are exposed to challenge during grazing. This will prime immune protection against lungworm and reduce the risk of disease.

Lungworm can be treated using IVOMEC® Classic Pour-On, IVOMEC Classic Injection (ivermectin) or EPRINEX® Pour-On (eprinomectin). These products provide persistent activity and control re-infection for up to 28 days after treatment. For adult milking cows a further important benefit of EPRINEX Pour-On is that it has a zero milk withhold, so can be used at all stages of lactation without the need to discard milk.

The diagnosis of lungworm is often based on clinical signs and grazing history. The response to treatment is optimised when it is administered as early as possible in the course of the disease. Furthermore, although only a small number of animals may be showing obvious signs of infection, it is important to be aware that all cattle in the herd will be at risk as they will have been grazing the same contaminated pasture, treatment of the whole group is important for effective control.

Wormers to Treat this Worm 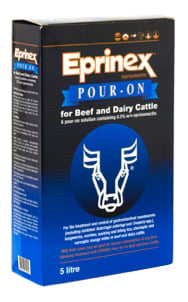 EPRINEX® the first dairy and beef eprinomectin wormer with zero-milk withhold was launched over 21 years ago and is still the market-leading beef and dairy wormer in the UK1. 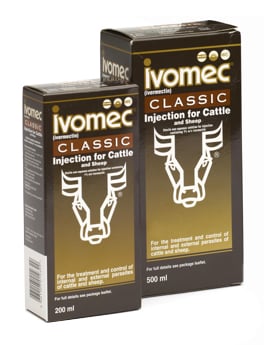 IVOMEC® Classic Injection and IVOMEC®Classic pour-on contain ivermectin for the treatment of a wide variety of gastrointestinal roundworms, lungworm and external parasites in cattle. 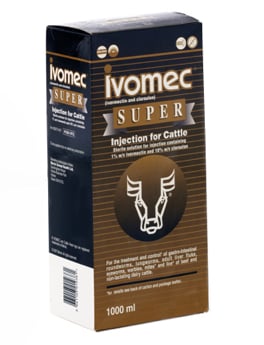 IVOMEC® Super Injection provides a ‘two-in-one’ solution containing ivermectin and clorsulon in a single injection for the control of gastrointestinal roundworms, liver fluke and external parasites in beef cattle.