IVOMEC Super is the pioneer ivermectin brand, plus clorsulon for liver fluke, that has been relied on more than 30 years, as IVOMEC Super was originally launched as IVOMEC F in the late 80s, and is still relied on today. A broad-spectrum, dual-active parasite control, used by thousands of farmers to help improve the health and performance of their cattle. 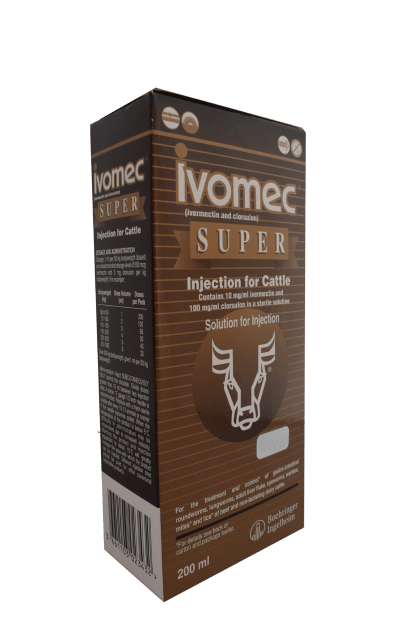 How to apply IVOMEC Super Injection

IVOMEC Super should be administered only by subcutaneous injection at the recommended dosage level of 1 ml/50 kg bodyweight under the loose skin in front of, or behind, the shoulder. Divide doses greater than 10 ml between two injection sites. A sterile 17 gauge 1/2 inch (15-20 mm) needle is recommended.  Replace with a fresh sterile needle after every 10-12 animals or sooner if the needle becomes soiled.

Mature fluke burdens have the greatest production impact on on cattle. Removing fluke burdens at the end of the grazing period, as animals are housed, removes this productivity check. Research suggests that the majority (97%) of fluke carried by cattle by the time they are housed are late immature/adult stages1. Treating at housing with a flukicide effective against the later stages of fluke, such as IVOMEC Super Injection for Cattle which is effective against the mature stage of the parasite (from 12 weeks), will ensure that cattle are immediately able to maximise their growth from winter rations.